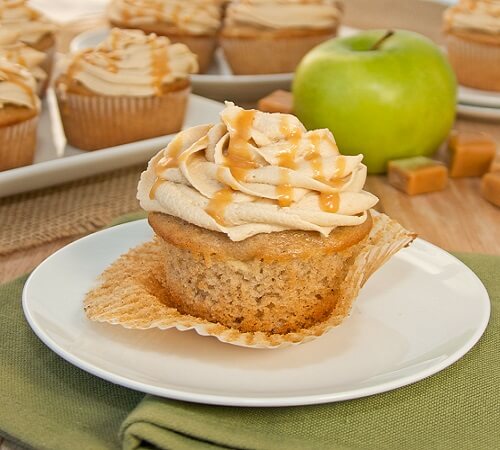 A distinctive way to enjoy apple cupcakes and present them to guests, an easy and fast way to try it now and serve it to your family and guests Apple and Cinnamon Cupcake Ingredients: Two cups of sifted flour .a teaspoon of pinging powder .a cup of white sugar Three eggs .a teaspoon of vanilla .a cup of corn oil Cinnamon teaspoon Half a teaspoon of ground ginger Three large green apples Half a cup of finely chopped walnuts For decoration: .apple jam Whole nut kernels How to make apple and cinnamon cupcakes: 1. Peel the apple into cubes and set aside on a plate 2. In another dish, sift the flour with the baking powder, cinnamon and ginger, stir it with chopped walnuts and raisins, and set it aside. 3. In a deep bowl, beat the oil and sugar well for five minutes 4. Add the eggs and vanilla and continue to beat until the mixture becomes creamy 5. Gradually add the flour, cinnamon and walnut mixture to the floss while continuing to mix on medium speed for five minutes, then on high speed for another five minutes. 6.Add the apple cubes and mix with a plastic spoon in one direction and from the bottom up and quietly 7. Grease cupcake molds with vegetable oil and flour, then pour the mixture evenly over the molds so that the mold fills a little less than half. 8. Put the mold in the oven at a temperature of 180 degrees at the bottom of the oven and wait for about a quarter of an hour or until the cake is done 7. After the cake is done, take it out and let it cool completely, then take it out of the molds 8. Put a spoonful of apple jam and a walnut on each cupcake, then serve