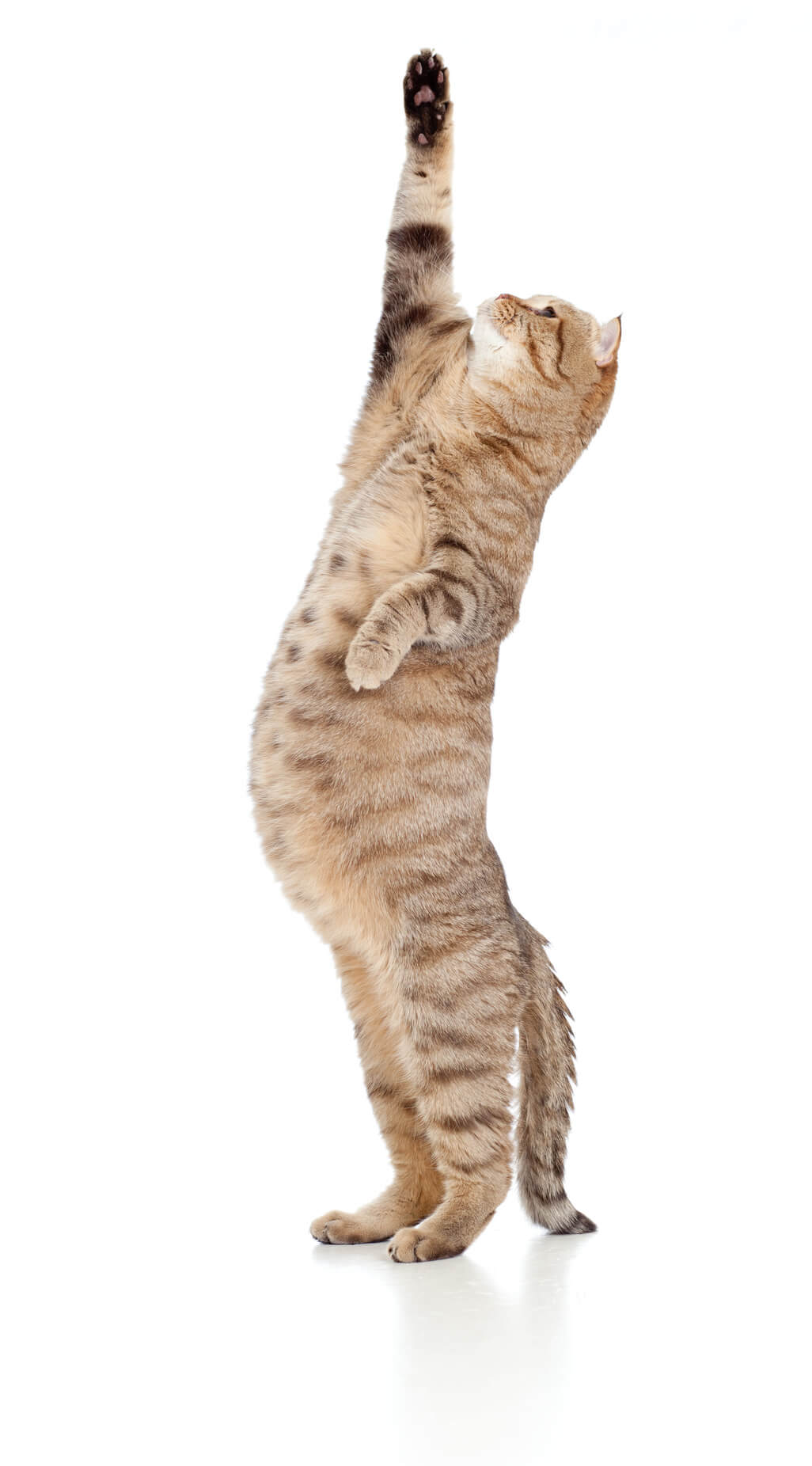 A pregnant cat goes through 5 stages:

The first stage “Cat rut”
It is the stage at which the cat enters the fertile period, cats can breed and reproduce as early as 5 to 6 months of age. Although the breeding season of cats approaches about a year, the breeding season in the western hemisphere is usually seen as occurring in the period Between March and September, it is interesting that a cat can have children from more than one father as it depends only on the number of male cats that the cat has mated with, once the cat’s egg is fertilized it begins to enter the second stage.

The second stage “the appearance of signs of pregnancy”
This is when the cat will begin to show signs of pregnancy. Signs that the cat is pregnant include a loss of appetite, an increase in size, and possibly small lumps that she can feel and are growing kittens in her womb.

The third stage “continued growth”
In the third trimester, kittens begin to grow rapidly and continue to gain weight and develop a large belly.

Fourth stage “labour”
This is the time when kittens start labor, about a week before they are due, during which time they will start nesting and two days before the kittens arrive they may stop eating.

Fifth stage “birth”
Finally in the fifth stage the cat will begin to labor, naturally labor is never comfortable and very painful, and if the cat is a new mother, she may act as if she is anxious and fast and will make a lot of meows or howls, the first cat is usually born about an hour after the start of labor and then follows her A new kitten is about every 15 to 20 minutes until they are all born.

cat fetus development stages
The duration of the pregnancy of cats is much shorter than the period of pregnancy of women in humans, which means that the growth of the fetus moves quickly, so the stages of the development of the cat fetus are divided over ten weeks:

first week
Once the kittens mate, it takes about 1 to 10 days for the sperm to find the eggs and for fertilization to occur.

second week
During the second week, the fertilized kittens’ eggs are implanted and the kittens begin to develop into embryonic membranes.

the third week
During the third week of pregnancy, kittens begin to grow significantly, including their organs, hormones begin to become active and a lot of physical changes occur in the mother cat, as her nipples swell and turn pink and she will begin to gain weight.

fourth week
Kittens can experience some nausea with a loss of appetite too just like humans, and by the end of the fourth week you may be able to feel that the kittens are already forming in the mother’s womb.

The fifth week
The vet can do a manual check-up during this week and feel the kittens so well that they might even be able to count the heads so they know how many kittens to expect, two? three? maybe ten?

the sixth week
Once the kittens reach the sixth week of pregnancy, their appetite will grow more, of course they will need additional nutrition to maintain their health and feed their children, so let them eat as much as they want and make sure that the food you eat is healthy and balanced, you can also look for food that contains minerals Extra iron and iron to ensure she and the cats get all the powerful nutrients they need, and the fun part of this week is that you might be able to see her tummy moving as the kittens squirm inside and turn.

Seventh week
By the seventh week, she will have a large and round belly and may start the nesting process. Nesting is when the cat starts looking for a safe and comfortable place to give birth to her babies. She may also lose her appetite during this week as the kittens take up more space and put pressure on their stomach.

The eighth week
During this week these kittens will be moving a lot, you will be able to feel and see them move, the cat’s nipples will be very large and swollen as the date of birth approaches, and you will also notice that the kitten takes care of herself so much that she may start shedding her belly fur, and again she may lose Her appetite during this time because cats take up a lot of space and put pressure on her stomach, and there is another thing you may notice that can happen during the eighth or ninth week where you see a little milk secreted from the nipples.

ninth week
It’s an exciting week when the cat can have her babies any day since then, some vaginal discharge starts to leak, and the discharge may be a little red or you may not see it at all because it will constantly lick itself, the cat may act as if it is anxious and looking for you for reassurance She’ll lie down a lot, and she may also pant and gasp and show other signs of agitation.

tenth week
Sometimes kittens don’t give birth until they are 10 weeks gestation or more, the kitten will go into labor and give birth one by one to give you a bunch of cute kittens.