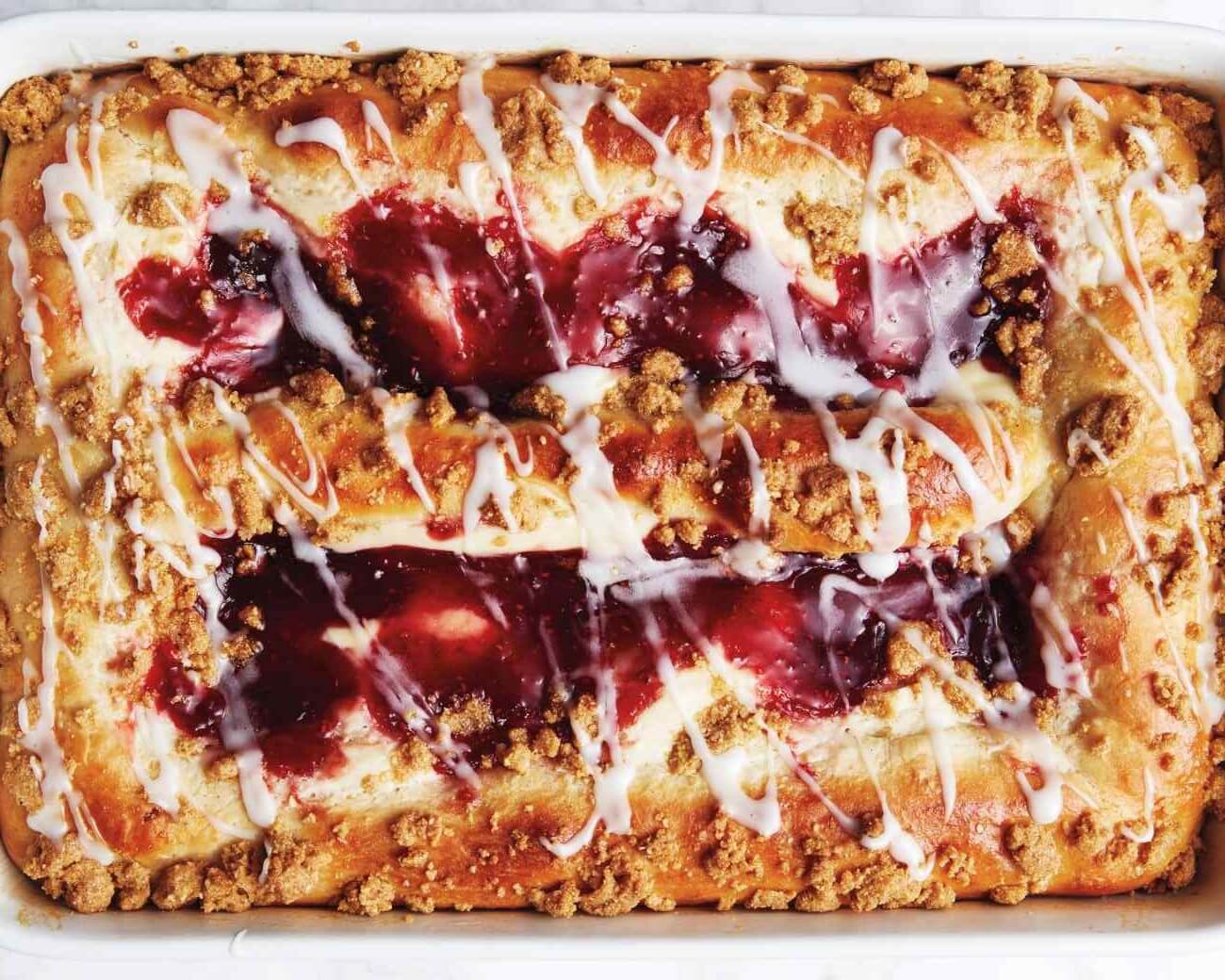 Danish cheese ingredients 1. Danish ingredients 3/4 cup of whole milk 1/3 cup of granulated sugar 8 tablespoons + a small amount of unsalted butter, divided into pieces 1 and a quarter teaspoon of salt 2 and a quarter teaspoons of quick dry yeast 2 large eggs, room temperature 1 egg white, lightly whisked 3 and a half cups of flour + a small amount 2. Filling ingredients 175g cream cheese, at room temperature 3 tablespoons of granulated sugar 2 tablespoons of flour 1 large egg yolk 1 teaspoon lemon peel + 2 teaspoons juice A quarter of a teaspoon of salt 3/4 cup strawberry or raspberry jam or a combination of both 3. Components of the top layer comminuted 2 tablespoons of flour ¼ cup of cornmeal 2 tablespoons of light brown sugar A quarter of a teaspoon of cinnamon A pinch of salt 2 tablespoons unsalted butter, divided into pieces 4. Ingredients for the glaze (shiny sauce) Half a cup of powdered sugar 2 teaspoons of lemon juice Preparation method To prepare the Danish 1. Heat the milk, sugar, butter, and salt, in a pan over a medium heat, stir them from time to time, until the sugar and butter melt, transfer them to a large bowl, and let them heat for 2-3 minutes, add the yeast, then the eggs and vanilla, add the flour Stir them until they form a sticky dough. 2. Knead the dough on a flat surface sprinkled with flour, and also sprinkle it on your hands, and continue to knead for 2-3 minutes, until the dough is soft and elastic, but still sticky, form a ball and transfer it to a large bowl greased with butter, and rotate the ball inside to be completely covered with butter. Cover and leave in a warm place until doubled in size, about 1 hour, take out the dough and spread it evenly in a lightly oiled (9 x 13) oven dish, forming an edge of the dough half an inch higher than the edge of the dish, and in the center of the dough form a small wall half width Inch along the dough, to separate the cake into two parts, cover, and let stand 45 minutes, until doubled in size. To prepare the filling Meanwhile, beat cream cheese in a bowl on medium-high speed until smooth, add sugar, and beat until fluffy, add flour, egg yolk, peel, lemon juice and salt, and beat until combined. To prepare the crumbled layer 1. Mix the flour, cornmeal, brown sugar, cinnamon, and salt in a bowl, then rub in the butter. In the flour mixture with your hands until they hold together, and there is no dry flour left, press them under the bowl and refrigerate until they hold together, about 20 minutes. 2. Prepare the oven at a temperature of 175°, divide the filling equally between the two parts of the dough, spread it to the edges, then spread the jam over it, and brush with egg whites both the raised edges and the wall between the two parts. 3. Break the top layer into small pieces, sprinkle on top, bake until golden and the top is crisp, about 25 minutes, let the danish cool completely in the oven dish, about an hour. 4. To prepare the glaze Mix the sugar and lemon juice well, sprinkle them evenly over the danish, and let them sit a little, about 10 minutes, until the glaze is set.